The Age of American Unreason 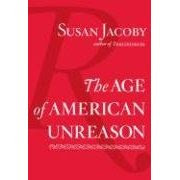 Identifying herself as a “cultural conservationist” (but by no means a cultural conservative), Jacoby laments the decline of middlebrow American culture and presents a cogent defense of intellectualism. America, she believes, faces a “crisis of memory and knowledge,” in which anti-intellectualism is not only tolerated but celebrated by those in politics and the media to whom we are all “just folks.” The Internet, for all its promise, is too often “a highway to the far-flung regions of junk thought.” Meanwhile, twenty-five per cent of high-school biology teachers believe that human beings and dinosaurs shared the earth, and more than a third of Americans can’t name a single First Amendment right. In such an environment, Jacoby argues, the secular left and the religious right can have no fruitful dialogue on issues like the separation of church and state. She offers little hope that the situation will improve, opining that, despite increasing levels of education, “Americans seem to know less and less.”
Βιβλία ΗΠΑ προτάσεις