“When you have people that are that passionate, all they need are the right resources”

Trying to Inject Entrepreneurship Into the Greek Economy

The adventure of new ventures. 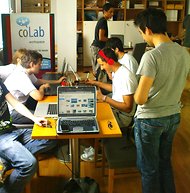 Courtesy of CoLab.Life in the CoLab.
It’s not easy being Greek. That’s doubly so if you’re an entrepreneur.
As Greece’s economy staggers under government debt and austerity measures, longtime independent businesses are going dark while hopeful newcomers struggle through red tape. (Last week, The Times’s Suzanne Daley reported on an olive oil start-up whose founder had to run a 10-month regulatory gantlet that included submitting board members’ lung X-rays and stool samples, just to get his company off the ground.)
But some entrepreneurs are pushing back against the bleak Greek narrative. Over the last year and a half, ambitious founders have taken advantage of depressed real estate prices to establish co-working spaces to serve their fellow start-up enthusiasts, places with names like coLab, Loft2Work, 123Pand ThermiLink. These hothouses, they hope, will offer a bright spot in the dark economy, helping entrepreneurs, particularly techies, to find fellowship, mentors, and maybe even access to capital as they build their companies.
“Despite all the doom and gloom, we’re trying to get some good things going,” said Stavros Messinis, 39, a co-founder of coLab, which opened 18 months ago in Athens. “Entrepreneurship is the way out of this. There is no other way. Greece has been an insular economy for too long, where people have either worked for the state or worked in retail serving the primary Greek market. There are very few Greek companies that are exporting anything. Right now we’re consuming, but an economy needs to produce if it’s going to grow.”
Getting coLab running took fewer than four weeks, Mr. Messinis said. Now the 4,300-square-foot space is home to 16 start-ups, including the Openfund, a seed-finance firm for innovative  ventures; Bugsense, a service that collects crash reports from mobile applications, and iMellon, a developer whose main product, an Android app called Historious, steeps smartphone-wielding tourists in Athenian history. (It’s worth noting that some of these companies are working from Greece but formally incorporated in other countries, in an effort to avoid some of the Hellenic headaches surrounding business creation and raising capital.)
CoLab began turning a modest profit four months ago, said Mr. Messinis, who plans to open two more locations soon. Last month, the space joined with Entrepreneur Week, an international event series that brought business experts to Athens from 10 countries and attracted about 600 participants, according to Gary Whitehill, the series’ founder.
“Greece really doesn’t have another option except to start harnessing entrepreneurship,” Mr. Whitehill said. “‘Laborious process’ is an understatement in terms of what it takes to become an entrepreneur in that country. But it’s going to break. Greece doesn’t have a choice but to break.”
In the meantime, Mr. Whitehill is planning further collaborations with coLab, including events where start-up founders can pitch their companies via Skype and get critiqued by American investors. (The organization’s next New York event begins on April 16.)
“When you have people that are that passionate, all they need are the right resources,” he added. Mr. Whitehill has his eye on a few ventures in particular: Virtual Trip Group, an accelerator and seed fund with a focus on e-learning for entrepreneurs, Made in Greece, a business-to-business portal for connecting potential exporters and suppliers with the outside world, andBabelverse, a real-time, on-demand audio translation service.
“For some of these guys, it really comes down to patriotism,” he said.  “The people who really care about Greece see their work as having a double bottom line: they’re making a short-term sacrifice for the long-term gain of their country.”
What do you think? Can entrepreneurs help lead Greece out of its financial crisis?
You can follow Jessica Bruder on Twitter.

Colab is a co-working & entrepreneurial space in the heart of Athens. Technology & Startups are our passion.
Athens, Greece · http://www.colab.gr/

eFront is a modern LMS that emphasizes the user-experience without compromising on functionality
http://efrontlearning.net