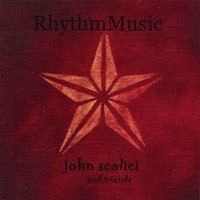 John Scalici is an internationally recognized drum circle facilitator, speaker, musician, clinician, and master teaching artist. He has brought his dynamic, uplifting programs to Asia as well as the United States. His powerful message of Unity Through Rhythm has been featured at college campuses, churches, corporate events, elementary and high school classrooms and throughout the health care industry.

His work with special needs groups has been featured nationally on the Hallmark Channel. He has initiated rhythm-based programs at the Alabama School for the Deaf and Blind, Children’s Health Services, and United Cerebral Palsy.
John is a member of the Society for Arts in Healthcare and the Percussive Arts Society Recreational Music Making committee. He is a contributing writer to Percussive Notes and the Society for Arts in Healthcare Newsletter. John is an artist/endorser for Remo drum company and Vic Firth drumstick company.

John has been a founding member of two national touring bands, Gravy and junkyardmen. In 1999 junkyardmen were considered one of the best live blues bands in the U.S. by Blues Revue and Blues Access Magazine. John still performs and records with many local and national musicians and has released two independently produced CDs: RhythmMusic and Rhythms for Drumming and Movement.