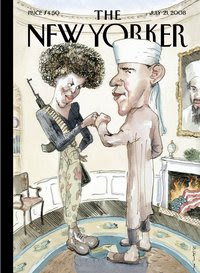 A liberal publication like the New Yorker thinks it's funny to make Mrs. Obama some radical black panther, and Barack Obama basically a terrorist (you'll note that he looks just like Osama bin Laden on the wall). And this is funny? Is the New Yorker so out of touch that they don't realize that much of America, or at least too much of America, harbors these very concerns about Obama and his wife?

"This might be a case of the liberal media "that bends over so far backwards to be "fair" that it becomes just as bad as FOX News. I'm sure the New Yorker thinks they're actually poking holes in the myth by making light of the stereotypes. Yeah, and tell us how this pokes fun at the stereotype? It reinforces it. And yet again, you'd never see them try anything like this with John McCain. God forbid you even ask a question about John McCain's experience, the media will destroy you. But paint Obama and his wife as America-hating flag-burning violent terrorists, and it's funny.

"Intent factors into these matters, of course, but no Upper East Side liberal -- no matter how superior they feel their intellect is -- should assume that just because they're mocking such ridiculousness, the illustration won't feed into the same beast in emails and other media. It's a recruitment poster for the right-wing.

""This is as offensive a caricature as any magazine could publish," says a high-profile Obama supporter, "and I suspect that other Obama supporters like me are also thinking about not subscribing to or buying a magazine that trafficks in such trash."

-New Yorker cover shows Oval Office with Obama as tribal African, wife as afro-70s-woman with machine gun, Osama on the wall, and flag on fire
from AMERICAblog: A great nation deserves the truth by John Aravosis (DC)