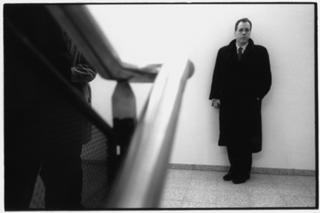 ‘‘When we sat down to eat,’’ Ellis writes about attending a neighbors’ dinner party, ‘‘I took inventory of the people in the room, and the remnants of my good mood evaporated when I realized how very little I had in common with them - the career dads, the responsible and diligent moms - and I was soon filled with dread and loneliness. I locked in on the smug feeling of superiority that married couples gave off and that permeated the air - the shared assumptions, the sweet and contented apathy, it all lingered everywhere - despite the absence in the room of anyone single at which to aim this. I concluded with an aching finality that the could-happen possibilities were gone, that doing whatever you wanted whenever you wanted was over. The future didn’t exist anymore.’’